The Corolla and Civic have often been compared to each other. Each is an extremely well selling vehicle and leaders in their class for reliability and resale value. This has been true for many, many years. In Canada, the Civic outsells the Corolla but elsewhere it is the other way around. The age old question has been and continues to be today; “why should I buy the Corolla and not the Civic” (or vice versa). And to that note, it really comes down to the person buying the vehicle or more accurately, for what purpose is the vehicle being used. Toyota and Honda have both realized this and have marketed their vehicles accordingly. Some might say they are after different demographics. Maybe, but let’s look at the differences and you decide.

Styling is always a personal preference but there is something to be said about age demographics and their likes and dislikes. Although I personally dislike generalizing a certain age or demographic, this clearly is the biggest difference between the two vehicles. The Civic is laden with all the newest entertainment gadgets and goodies where the Corolla has a more simplified version, doing everything it needs to do, such as USB, Bluetooth with voice recognition, touch screen, backup camera, etc. but with a much more simple, elegant user interface that requires less concentration to use for those less familiar with the latest technology. On that note, the dash itself also reflects the different demographics. One has to admit the younger generations are more used to information overload than the older generations. Again, the Corolla’s display is intuitive, providing the essential information needed at a glance while the Honda, while stylish according to some, does seem to present a little too much information to allow for concentrated driving. 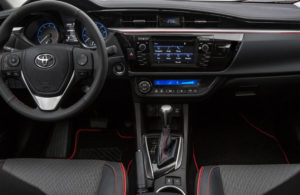 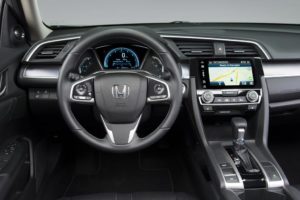 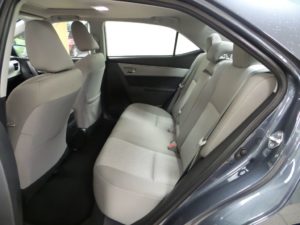 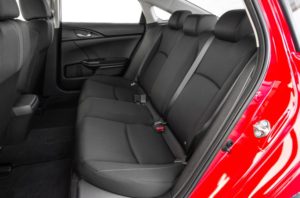 And that leads me to the most important aspect to the two cars which is how many people on average will be in the car at any given time. The Honda is clearly thinking that most times, will be just the driver, maybe the passenger from time to time and clearly the back seats, when compared to the Corolla, are not used barely at all. Toyota has made great efforts to have very spacious back seats with 1051.2 mm rear legroom compared to the Honda’s 950. In fact, the Corolla beats the Civic in pretty much every interior dimension, such as head room in either the front or rear. But comfort cannot always be dictated by the numbers. One look will instantly remind the older generation of the usual “who gets to sit in the middle” argument of old times. This was because rear wheel drives had a very obtrusive floor well hump to make room for the driveline. In front wheel drives, they are virtually non-existent in most cars, except the Honda. The hump makes it very difficult for anyone sitting in the middle to have any sort of comfortable foot placement. But Honda seems to think that no one will as even though they provide a seatbelt, the hump extends into the seat itself. One look at the padding of the seats themselves will also tell you which is designed for comfort. The Corolla’s padding is much thicker and plush and the seating position is in such a manner to make it easier to get in and out, especially for aging grandparents. I may not have it correct but it seems like the Civic is again designed more for a single person, maybe even a young couple but for those with a family, the Corolla is the better answer. And by family, I mean not only those with small children in car seats, but also tall teenagers or once we swing to the other end of the scale, older parents who need a ride.

By the way, the pictures above are a little misleading. Being long in the leg myself, I have quickly figured out how to determine true legroom by pictures. I always look for the guide rails of the front seats to see how far up the seats are and also the middle console box. If you look at the pictures, you will notice the front seats are pulled up to a probably unusable position to give the illusion of greater legroom, whereas the Corolla front seats are actually in a driving position.

Last but not least, what would make one buy a Corolla over the Civic? Well simply put, the Corolla similarly equipped is now far less expensive. With the most popular model being the LE, which provides the backup camera, 7 speed CVT transmission, heated seats, touchscreen radio, USB, Bluetooth with voice recognition as well as text message capabilities on most phones, standard LED headlights for better nighttime driving and visibility and less eyestrain, as well as other features coming in at $20140 plus fees and taxes, it is about $2000-$3000 less than the similarly equipped Civic EX. Granted the EX comes with a moonroof, but again that speaks to a different demographic.

So is the Civic a bad car? Definitely not! And depending on who you are, there may very well be reasons why you would wish to spend more to have the Civic versus the Corolla. I think the Civic is a perfect vehicle for a limited demographic whereas the Corolla succeeds in meeting the needs of a much larger demographic in multiple markets worldwide, making it the best seller in most places. Both are great cars. You will need to decide which will meet your needs now and in the future.