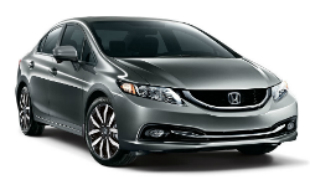 Compact cars are a crowded class with some serious heavy-hitters. However, for Mississauga shoppers in the market for a versatile compact that picks up where other lesser vehicles leave off, it’s certainly worth coming to our Toyota dealership and taking a look at the 2016 Toyota Corolla.

Compact cars can be the victims of bad stereotypes. Sometimes the term conjures feelings of compromise between what you want in a car and what you need. Don’t worry. When you get behind the wheel of a 2016 Corolla, there’s no need to compromise. Generous rear legroom bests the Civic by over 132 mm- that’s a lot more space for a comfortable ride. When it’s time to pack up some serious cargo, the Corolla has 60-40 split-folding seats so you can still take another passenger with you. The Civic is less adaptable, with a full-folding seat that doesn’t provide the versatile accommodations you can expect with a Corolla. With superior cargo space and allover passenger volume, it’s clear that Toyota is dedicated to bringing everyone and everything you need.

When you’re driving, you don’t want to take your eyes off the road. Drive your 2016 Toyota Corolla around the Mississauga area safely with more distraction-reduction features than the Civic. Connect your phone to your car with Bluetooth and use the steering wheel-mounted controls to take phone calls on your drive- or to reject them. Sometimes, a drive is exactly what you need to get away from it all. In that case, the Toyota wins again- the base model Honda Civic isn’t equipped with these features.

With its efficiency, agile handling, quick steering, and versatility, the 2016 Corolla leaves the Civic behind. Visit our dealership serving Mississauga for more information and a test drive of the perfect compact!