The official Canadian release date for the Toyota Prius Prime has not been announced but it will be coming soon to Canada as a 2017 model. The Prius Prime was teased at consumers and then revealed in the New York Autoshow on March 23rd. All that was revealed in the teaser was this:

TORONTO, ON: March 15, 2016 – The city that never sleeps is about to get a wake-up call. Toyota is rolling out the next mechanical marvel in the Prius lineup at 9:10 a.m. EDT, Wednesday, March 23

Naturally, people were curious and excited. And boy, they were not disappointed.

The Prius Prime is the official plugin vehicle for Toyota, replacing the previous generation. That vehicle looked virtually identical to a regular Prius and even the name did not differentiate it from the regular Prius other than the add-on “plugin”. Also, sales were restricted to Canada after a short delay and only a handful of US states. The new Prime will be available in every US state and all of Canada. Yes, you read that correctly, it will be available soon in Canada! The anticipated release of the Prius Prime is expected to be in the late fall as a 2017 model.

The Prius Prime is different than the regular Prius and definitely different from the outgoing Plugin. It is 60 mm longer, 15 mm wider and 22 mm lower than the 2015 Prius Plugin. It will also have a new independent double wishbone rear suspension and a lower centre of gravity which should give it an improved driving feel. There are also numerous weight saving measures such as an aluminum hood and carbon fibre rear hatch which should also help the performance of the Prius Prime.

Although based on the same platform as the regular Prius, there are many styling cues that help set the Prime apart from its regular Hybrid cousin. First off, and most striking is the wraparound rear LED taillight incorporated into the rear spoiler. Instantly, this separates it from the regular Prius, either in the dark or in the light.

But the changes do not end there. Up front, the headlight treatment combines a squared off LED look with a blacked out centre section, combined with deep creases to help give the car a much edgier look. 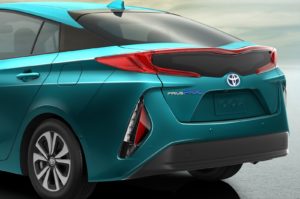 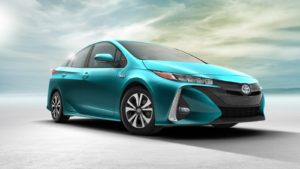 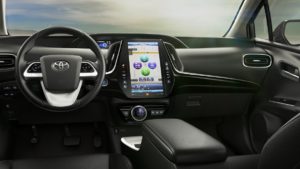 Mechanically, the Prius Prime will use the same 1.8L Atkinson cycle 4-cylinder engine and CVT transmission as the regular Prius but gets a redesigned 8.8 kW-hour lithium ion battery for increased electric range, plus a Toyota first dual motor generator drive system for improving acceleration. This also means that this generation of plugin will stay in EV (battery only) mode even under full acceleration providing there is sufficient charge in the battery.

Speaking of battery charge, it takes about 5.5 hours to charge from a standard 120 V outlet using no special equipment other than the supplied charging cord. The range has improved to 35 kms from 20 kms on strictly battery mode before the engine will kick in, which can then extend the range up to 965 kms on a full 43L tank of gas. However, it is estimated for close to 50% of all people, they can be electric only, jumping to 80% if there are plugs at work to charge the vehicle.